The power of Branding, name branding and branding by association.

TO SEE OR NOT SEE? What do you see?

So far Nike has spent $60 million on Tiger Woods.

If you invest in companies that spend that sort of money on hype, the skill of management in distilling out bang for buck is an important consideration. That of course is the problem with advertising, only half of it works (if you’re lucky) and you never know which half, and more to the point, working out the value of the brand is just as hard.

There were three reactions by the sponsors to the “difficulties that Tiger and his family are facing”. One was to run away from the spotlight (Accenture and AT&T ran a mile), one was to wait and see (Gillette and Tag Heuer).

Nike ran straight towards the fire. On the day-before Woods teed up at the Masters, they put out a controversial “Tiger” Advertisement that some people called “creepy” and others called “disgusting”.

But they all watched it.

So was that a “Setback…or a Test”? 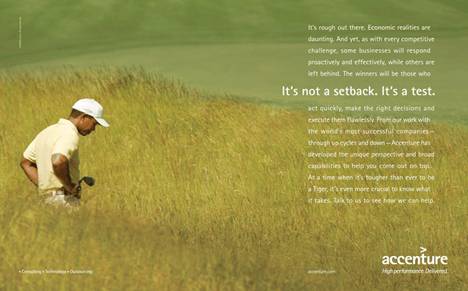 The Power of a brand:

What Nike needed to do to protect his investment.

Eldrick Tont “Tiger” Woods (born December 30, 1975) is an American professional golfer whose achievements to date rank him among the most successful golfers of all time. Currently the World No. 1, he was the highest-paid professional athlete in 2008, having earned an estimated $110 million from winnings and endorsements.

Woods has won 14 professional major golf championships, the second highest of any male player (Jack Nicklaus leads with 18), and 71 PGA Tour events, third all time. He has more career major wins and career PGA Tour wins than any other active golfer. He is the youngest player to achieve the career Grand Slam, and the youngest and fastest to win 50 tournaments on tour. Additionally, Woods is only the second golfer, after Jack Nicklaus, to have achieved a career Grand Slam three times. Woods has won 16 World Golf Championships, and has won at least one of those events each of the 11 years they have been in existence.

Woods has held the number one position in the world rankings for the most consecutive weeks and for the greatest total number of weeks. He has been awarded PGA Player of the Year a record ten times, the Byron Nelson Award for lowest adjusted scoring average a record eight times, and has the record of leading the money list in nine different seasons.

On December 11, 2009, Woods announced he would take an indefinite leave from professional golf to focus on his marriage after he admitted infidelity. His multiple infidelities were revealed by over a dozen women, through many worldwide media sources. Woods returned to competition for the 2010 Masters on April 8, 2010, after a break lasting 20 weeks.

published in / kreative finds / PRODUCTS
share this post /
lastest articles by kihada / go to kreative finds
back to top
© Kihada Keative. All Rights Reserved 2023
Back to Top|Terms of Use|Privacy Policy